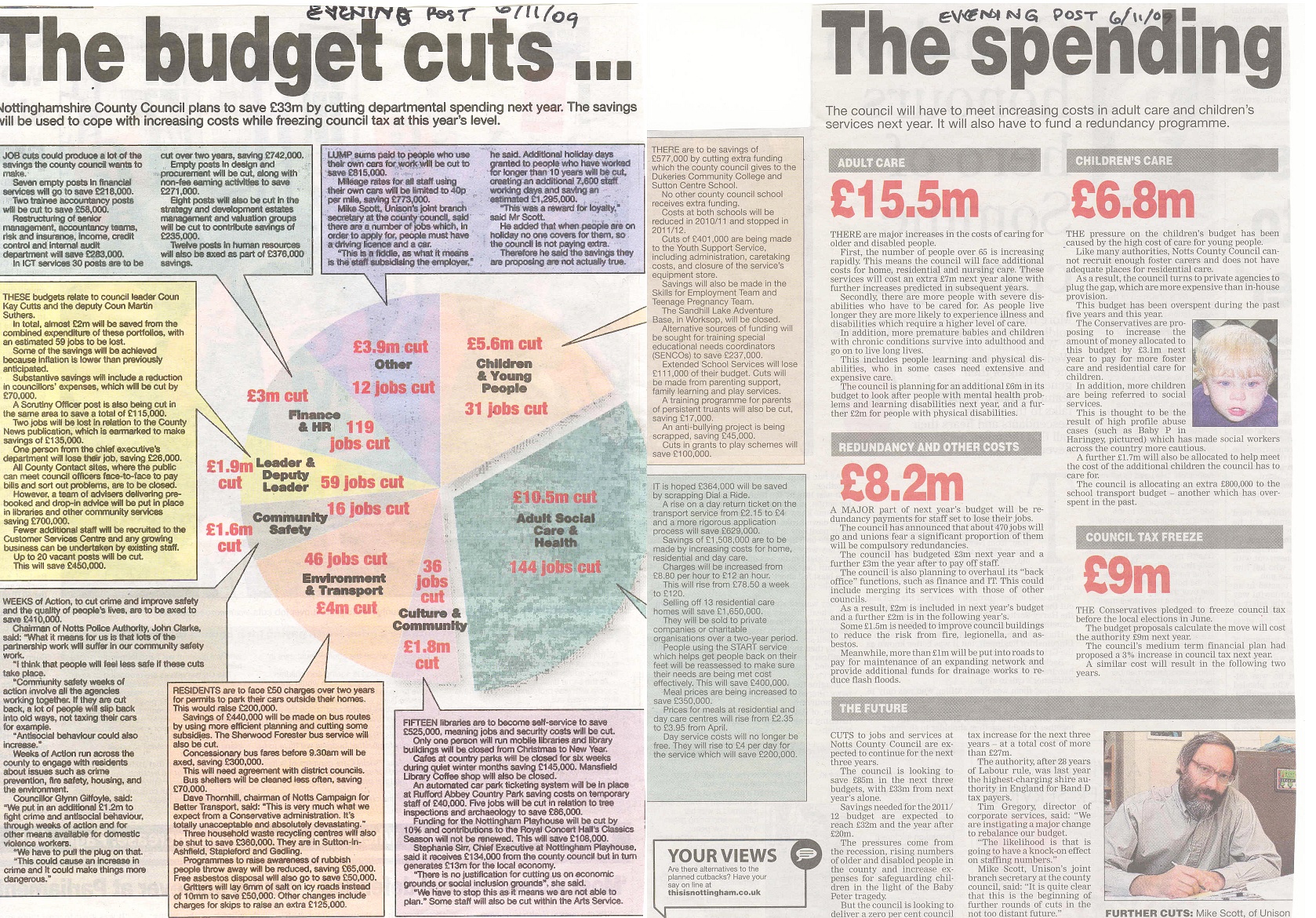 This page highlights articles on cuts and anti-austerity protests in the media – Mainly local plus national and international.

Jobcentre was set targets for benefit sanctions, The Guardian, 24/3/2013.

Unite leader Len McCluskey calls for protests and strikes against cuts, The Guardian, 11/09/2011.

Nottingham Supports the Spanish revolution! At the Green Festival in the Arboretum, Spanish Students and residence of Nottingham have been promoting the anti-austerity events in Spain. Demonstrations in the Market Square, Nottingham and elsewhere in UK have also taken place. Nottingham Indymedia, 23/05/2011.

Hospice day care service for terminally ill is saved, Nottingham Post, 17/5/2011. There is also a letter written about Hoayward House in the Post by one of its users, a little while ago: http://www.thisisnottingham.co.uk/news/Hayward-House-vital-service/article-3560988-detail/article.html

NHS reforms live blog – what is happening to the health secretary’s bill?, The Gauradian website, 9/5/2011.

Video on the Guardian website shows police deception leading to arrests of 139 UKuncut activists on March 26th 2011 in London on the day of the TUC demonstration and occupation of Fortnum and Mason (the vast majority of the ‘record’ number of arrests that day). Published on guardian.co.uk, Monday 28 March 2011. See also – evidence of state paranoia about anti-cuts protests on the Policy Exchange website.

How the government cuts are hittting the worst off hardest, Daily Mirror 11/03/2011.

Rushcliffe residents first to be hit by lights switch-off?, The Nottingham Post, 17/01/2011

Choice media article of the year: Austerity cabinet has 18 millionaires, The Times, 23rd May 2010.

Free free to add your news or links to news as comments.

Protesters march into city centre for public services to be spared. Good to the title has been changed from ‘Protester march on city over county cuts’ as used in the printed edition this morning – need we have to spell it out we are opposing both City cuts and County cuts! And as for the police estimate of 400 – think they may be advised to cut their demo-counting division for incompetence. Evening Post, 22/11/2010.

Hundreds to take part in “biggest demonstration since the Poll Tax” tomorrow, Although note that while the assembly point is 11.30am, the march will leave the Forest at 12.30pm towards the Market Square. It won’t leave at 11.30am!. Evening Post, 19/11/2010.

Student protest shows a generation finding its voice, The Mirror, 12/11/2010

Town hall staff may be asked to work for nothing to save jobs, Manchester Evening News, 06/09/2010

Workers rally across Europe to protest against cuts, The Guardian, 29/09/2010