Notts Uncut’s next action is this Saturday (17th December) and will be meeting at 1pm outside Parliament St. Boots and moving onto their target, which will be decided by UK Uncut’s facebook poll.

Come along and bring your anti-cuts Christmas carol songsheets and Santa hats.

A Notts SOS article from 2010 to get you in a festive mood: http://nottssos.org.uk/2010/12/20/christmas-carols-subverted-into-anti-cuts-protests-with-12-days-of-cripmas-video/

Recently, some news has emerged about cuts to City Libraries, which are managed separately from those in the County. Library managers and others of similar rank were called to meetings soon after the New Year, to be told the news. Opening hours across nearly all City libraries (excluding the main library at Angel Row) are to be cut by 10%, with a consequent reduction in staff. Management claims that there will be no actual redundancies amongst library assistants (the lowest paid), but that unfilled vacancies, voluntary early retirement and reductions in hours (voluntary??) will fill the gap. However, there will be redundancies amongst librarians, senior library managers and library managers, who have received “At Risk” letters. Currently, nearly all libraries have a manager, one grade up from a library assistant and theoretically responsible for the day-to-day running of the library; in future, library managers will be managing more than one library. Libraries already operating part time hours will be open even shorter times, leading to the possibility of borrowers never finding them open and giving up on using them; then there will be “no public demand” for those libraries.

There will be no cuts at senior management level. Perhaps this is because nobody knows what they do.

The City book budget will be cut by 25%. As managers have, for years, engaged in a campaign to throw away perfectly good books bought by public money, this could mean a severe depletion of stock, especially of books with less mass-market appeal.

Library managers at the meeting were told to cascade this information to their staff. So library assistants will or will not have learned about it depending on whether or not their managers attended the meeting, and whether or not they have shared a shift with their library manager. Senior managers have also started touring community libraries to talk individually with library assistants. Cuts will be implemented before April.

It had previously been known that, later this year, Carlton Road library will join Top Valley, Bestwood, Wilford and Beechdale in being shut. Senior management will not guarantee the existence of any library, and expect to make further cuts beyond those described, in the future. Also of concern is the introduction of charging for computer usage in libraries, which, of course, will hit the poorest (including asylum seekers trying to keep in touch with families or support their cases) hardest.

But all is not gloom. According to reports, Loxley House (the new City Council admin HQ) was this year treated to a christmas tree costing £5,000.

To get involved with Notts SOS and fight for our libraries and other services: come to our conference on Saturday 15th January.

Elves are exemplars of the Big Society, are they not? Is this the future for City Council workers in 2011? 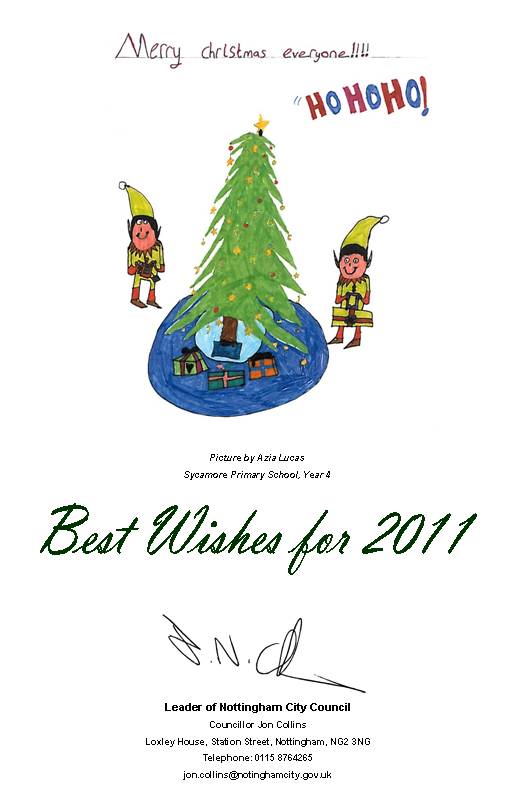 [youtube=http://www.youtube.com/watch?v=qKdKzalMhXc]The 12 Days Of Cripmas is a topical take of a classic carol listing the benefits and services currently being removed from disabled people in Britain. The lyrics were written by a user of the Ouch messageboards, sent to Where’s The Benefit and the track produced and directed by BendyGirl of The Broken Of Britain. We’re all incredibly proud of Imana our 11 yr old singing star who is a child carer for her mum who has Multiple Sclerosis.

See also, about a specific cut in Notts County (courtesy of Parish of Nottingham blog, where Vogon commander would appear to be County leader Kay Cutts): http://parishofnottinghamshire.blogspot.com/2010/11/disabled-to-suffer-under-vogon.html
Creative carols were also sung on the 18th Dec anti-tax avoidance demonstrations in Nottingham.