Four videos from Saturday’s May Day (international workers’ day) celebrations in Nottingham city, march into town from the Forest Recreation ground to the city centre and rally in the Congregational Hall, Castle Gate.

Video of march and start of rally (MC speech): http://www.youtube.com/watch?v=wNW1-isw2Uw#!

Video of the Meale protest (at the start of the May Day Rally event) and Notts Unison speaker
https://vimeo.com/41626666 (password is indymedia).

The half a million who marched and took action in London on Saturday 26th March 2011 made our feelings known and we showed our strength. Those who are active in Notts SOS and from the many other anti-cuts groups around the country, together with all manner of service users and welfare and pension recipients, workers, students, families and children took to the streets to say no to the cuts.

The press and politicians seem to have made their minds up already. According to Lib Dem’s Vince Cable on the BBC Politics Show today “We’re not going to change the basic economic strategy” and, “No government – coalition, Labour or any other – would change its fundamental economic policy simply in response to a demonstration of that kind.”

Is this a challenge? It begs the question of what exactly would change the government’s mind? Certainly Notts SOS will stick to its call for “No Cuts” which means we will need to carry on the work of making the politicians aware of our demand. But we have already lost a lot and there will be more to be lost in the new tax year if we do not stand up and fight. So let’s all get involved.

Feel free to share your personal stories of the day, and links to your articles, blogs, photos and videos by adding a ‘comment’ to this article. You can also do the same on the Notts SOS facebook page.

A selection of images of the day:

Also watch: Video of the deception by police on UKUncut occupation of Fortnum and Mason, leading to their ‘record’ number of arrests on the day: http://www.guardian.co.uk/uk/video/2011/mar/28/fortnum-mason-protesters-uk-uncut-video. Not surprising to hear they will be taking legal advice …

Here are initial reports and links to photos & videos of the lively Council House demonstrations in the Market Square and ‘public’ gallery that Notts SOS and other protesters were ‘escorted’ from (one carried out) by police so that the City Council cuts budget meeting could continue behind closed doors after being suspended during the action. Protesting started at 12 noon and continued until 7pm. Council leader Jon Collins was harangued in the Market Square in the evening and there was a ‘Fight the Cuts’ banner drop on Main Marian Way during the day. This was after over 1800 signatures were handed to him from a petition urging the council not to cut services, but to implement a ‘needs-based’ budget. On the same afternoon, Vodafone was targetted by Notts Uncut for its corporate tax evasion and was shut down yet again. There is a lot more to do now cuts budgets have been passed in both the City and County. Come to the next Notts SOS meeting at the YMCA/ICC on Mansfield Road, Monday 14th March at 7.30pm.

Also come to the Market Square again today (8th March) for the International Women’s Day centenary events at 5pm focussing on the disproportionate effect of the cuts on women (then at Thompson’s Solicitors at 5.30pm).

Videos from 7th March 2011 from various individuals, on YouTube

COUNCILLORS last night approved some of the most swingeing cuts seen in the city for a generation.

Around £33 million of cuts were given the go-ahead at a Nottingham City Council meeting.

It comes after the Government reduced the council’s grant by 8.4%.

The council also approved plans to cut its supporting people budget, which helps vulnerable people in the community.

NEW – Support from singer/songwriter Billy Bragg who visited the University of Nottingham occupation last year:
I wish to add my voice to those of Notts Students Against Fees and Cuts and Notts Save Our Services in urging Nottingham City Council to stand up to central government and passed a needs based budget. The big society that I want to live in should to be driven by compassion, not market forces.

Hi Billy,
Thanks for giving your attention to this. This is what has happened and what we’re passing to the press.
(Notts Students against Fees and Cuts)

Nottingham City Council are meeting today to pass a budget passing on sixty million pounds worth of cuts, which will hit the poorest and most marginalised in our society. While protests continued outside the building, members of Notts Students against Fees and Cuts and Notts Save Our Services spoke passionately from the public gallery, urging the council to stand up to central government and pass a needs based budget. After a brief exchange the councillors closed the meeting, refusing to listen to the views of their constituents.

The protestors then staged a good-natured, peaceful sit-in. They were offered a private meeting with the leaders of the council, which was refused because it was conditional on the end of the sit-in. Eventually the police forcibly removed the peaceful protestors, including a wheelchair user and a young woman who was carried from the building.

The meeting has now reconvened in private so that the council can force through its budget against the will of the people of Nottingham. Protestors are gathering again today at 5pm.
—

Inside the council house 1
[youtube=http://www.youtube.com/watch?v=FzXPu-rbldQ]

Here are links to reports about Thursday demo at County Hall against Notts County Council cuts and job losses with photos and video:

More coming soon at City Council on 5ht and 7th of February. For inspiration see reports of occupations of town halls and council buildings in London this week:Haringey and Lambeth, and protest at Southwark

And some links made here in another Notts video about the hypocrisy of the government over egypt, libya and bahrain, selling arms to dictators, and business deals. Why the cuts here are not necessary. And let’s all learn to ‘fight like an egyptian’!

Anti-cuts events: January 24th-30th 2011. Follow links for details. Plenty to get involved with.
Update: find out about further meetings and events here: http://nsafc.wordpress.com/2011/01/22/action-24th-jan-to-5th-feb/

Saturday 29th Jan: Education no-fees/cuts demo in London. Called by Education Activist Network, National Campaign Against Fees and Cuts and University College Union (UCU). Coaches leave Nottingham Trent SU at 8:30am, Nottingham Uni (Portland Building) at 9am. Tickets are £7 concession, £15 waged and must be bought in advance. To book text/call 07849 392 842. Download flyer: http://nottssos.org.uk/wp-content/uploads/2011/01/national-demo-fees-cuts-29-jan-2011.pdf. There is also a demo in Manchester on the same day which UCU and PCS are also supporting – there are coaches – contact respective unions. Nottingham Students now have tickets to Manchester as well. So take your pick. Email nsafac [at] gmail.com for tickets both events.

Video extra: Think tank Policy Exchange worries about ‘domestic extremism’, including anti-cuts campaigns (and websites!). Apparently it’s unfairness that makes ‘the British people’ rise up and this must be addressed by the government before it’s hijacked by the Left and anarchists. It’s a long video with a range of experts, who are mostly ex-police – maybe they are getting a bit worried? They are certainly saying the state should be getting more prepared. See/listen around 3 mins in about those terrible UKUncut flash mobs that have been used to close stores (see also near end of the video a suggestion that it’s time their website be brought down – how democratic!). Then 7 mins in – an infiltrator of CND talks about the general problem of anti-parliamentary groups. Various stuff about kettling and other public order tactics and the terrible constraints of the Human Rights Act. And a suggestion that a royal wedding protest with anti-cuts flavour could be a problem. Enjoy.

PolicyExchangeUK | 11 January 2011 | 0 likes, 42 dislikes
There are increasing signs that significant sections of the extreme left have little intention of confining their opposition to Coalition policies to peaceful, democratic protest. In recent weeks we have seen riots over student tuition fees, the forcible closure of high street stores by flashmobs and also growing demands for industrial action to undermine the Coalition administration, including from the leader of Britain’s biggest trade union.
Do these actions portend a dangerous new trend towards the use of physical force? If so, what can and should be done to prevent this phenomenon becoming a regular feature of the national landscape?

Following a Commons vote yesterday, access by 17-18 year olds in England to the Educational Maintenance Allowance (EMA), that supports student to stay in school/college after age 16 is closed to new applicants from now on, then to be withdrawn for existing recipients in September. The means-tested £10-£30 allowance used to be a bursary of £40 but it is now gone completely. This is not gone without significant opposition though – see Nottingham Indymedia with photos of Nottingham students’ protest on 19th Jan:
http://nottingham.indymedia.org.uk/articles/910 following several other demonstrations starting last year.

Watch TV footage of the demo on ITV website including an attempt to ‘storm’ the council house prevented by police (there’s always another time!!): http://www.itv.com/central-west/fighting-ema-cuts95064/

Northern Ireland, Scotland and Wales have their own EMA schemes which are still open but these are also under review (see Scotland example).

More info, and forthcoming events: Nottingham Students Against Fees and Cuts (NSAFC). School, college and university students are continuing to oppose cuts and rises in fees. 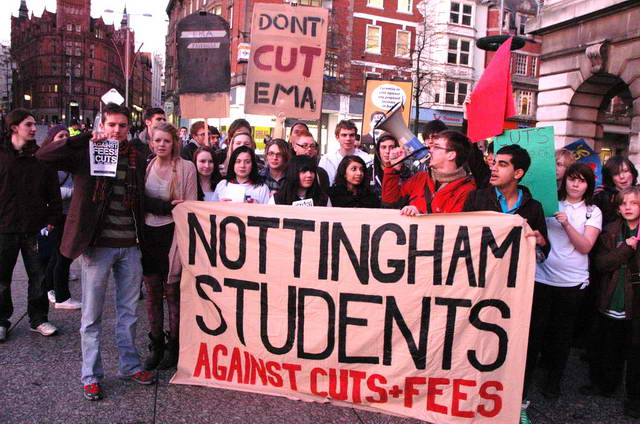 See inspiring photos from todays protest against the cut to Educational Maintenance Allowance that will affect 16-18 year olds, that can be found on the Nottingham Students Against Fees and Cuts (NSAFC) website: http://nsafc.wordpress.com/2011/01/11/ema-demo/.

The protest was supported by university students and also focused on the increase of fees to £9000 a year due to begin 2012 that was passed in the House of Lords in December.

More photos can be found on Nottingham Indymedia: http://nottingham.indymedia.org.uk/articles/875

Also today, the courts jailed Edward Woollard, the 18 year old student who dropped a fire extinguisher from the roof of the Tory HQ, for 32 months for the public order offence of ‘Violent Disorder’: http://www.indymedia.org.uk/en/2011/01/471869.html. Many other cases are due from the same day. For their support see Stop the hunt on the Millbank protestors (Facebook) and We need unity – defend the Millbank protestors. Also (support statement immediately after protest): Sign this statement to stand with the Millbank protesters against victimisation!

Clearly if you are going down to the next demo it’s a good idea to have some legal knowledge. If you don’t have local legal support on your coach, the ‘Bust Card’ of the Legal Defence and Monitoring Group in London is a very good resource worth taking with you. LDMG are very experienced with police repression, coming as they did out of the anti-Poll Tax ‘Trafalgar Square Defence Campaign’, whose http://www.ldmg.org.uk/ members of have recently supported the anti-fees demos and occupations.

Even as Christmas approached, the cutting of public services in Nottinghamshire continued. The festivities have taken the sails out of the resistance to these attacks, but I’m sure it will be back with a vengeance in the new year. (On which note, make sure you put the Combating the Cuts event on January 15th in your diary.) Until then, why not spend some of the post-Christmas lull reading up on exactly what’s being cut? Knowledge is power and all that.

[youtube=http://www.youtube.com/watch?v=qKdKzalMhXc]The 12 Days Of Cripmas is a topical take of a classic carol listing the benefits and services currently being removed from disabled people in Britain. The lyrics were written by a user of the Ouch messageboards, sent to Where’s The Benefit and the track produced and directed by BendyGirl of The Broken Of Britain. We’re all incredibly proud of Imana our 11 yr old singing star who is a child carer for her mum who has Multiple Sclerosis.

See also, about a specific cut in Notts County (courtesy of Parish of Nottingham blog, where Vogon commander would appear to be County leader Kay Cutts): http://parishofnottinghamshire.blogspot.com/2010/11/disabled-to-suffer-under-vogon.html
Creative carols were also sung on the 18th Dec anti-tax avoidance demonstrations in Nottingham.