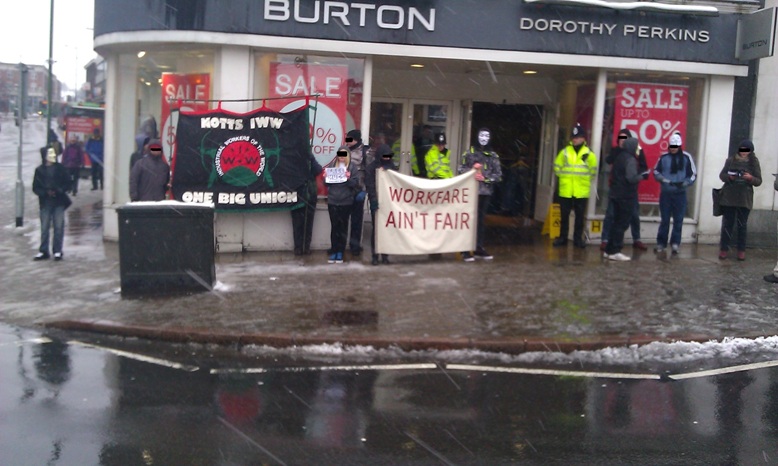 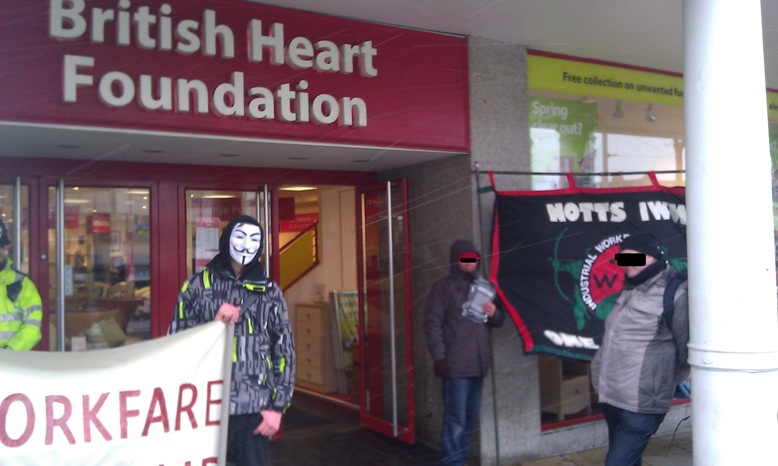 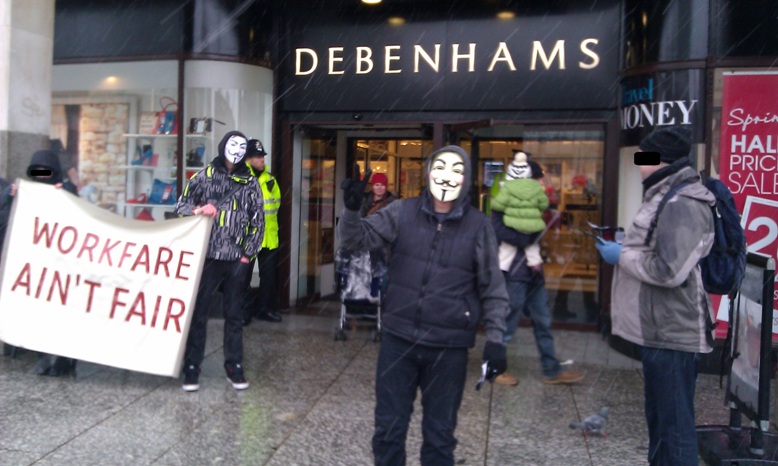 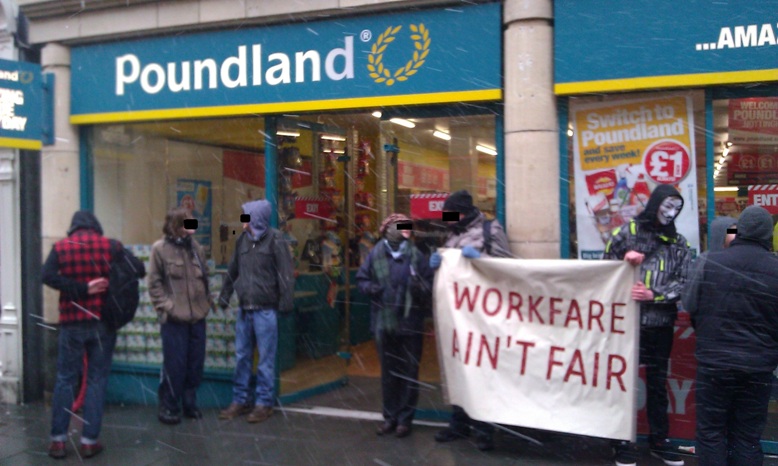 Boycott Workfare have reported on the first three days of action against workfare (compulsory work for benefits) which started on Monday 18th March:

The Nottingham campaign encourages everyone to show their opposition to workfare by coming on the Burton blockade against workfare – Saturday, 23rd March 2013, 2.00pm.
Meet at the left lion in Nottingham City Centre, Old Market Square.

On Saturday September 30th, a group of anti-workfare activists took to the streets of Nottingham to picket some of the corporate workfare profiteers and to highlight why workfare (work for benefits) is such a dangerous idea. Both charities and high street shops are benefiting from free labour organised by job centres and third party providers (who also take a cut). Activists visited Burton, Barnardo’s, Primark, Greggs and Superdrug with a banner, sound system and flyers.

Take part in the day of action against workfare on 8th September –
charities should know better!

Last time groups across the UK got together to tackle workfare, Holland &
Barrett – one of the biggest workfare offenders – announced that they
would be pulling out. A big shout out goes to SolFed who organised pickets of Holland and Barrett all over the country.

With workfare amongst corporate companies in retreat, we are turning our
attention in September to charities who are set to receive a huge influx
of workfare as the government roll out their Community Action Programme
http://www.guardian.co.uk/society/2012/jul/29/long-term-unemployed-unpaid-work.

We will be taking to the streets to remind charities that workfare is
never for ‘community benefit’ – as the government are trying to claim by
involving charities – and that they have a duty to stand up against such
punitive and exploitative schemes. Join an action on Saturday 8th
September on your local high street. Check the facebook group to find your
local action or arrange one on your high street. Also, keep your eyes
peeled for ’10 top reasons charities to oppose the involvement of
charities in workfare’ blog coming soon on the Boycott Workfare website.

Actions against public organisations that are taking workfare will be
coming soon too and pressure on corporate companies will continue!

So many high street stores are involved in taking on forced unpaid labour that there is plenty of choice – Tescos, Asda, Holland & Barrett, Primark, HMV, and Topshop to name but a few.

Workfare means that those who need welfare are forced into unpaid work for multi-million pound companies. Instead of a living wage, they receive only JSA – a tiny £53 a week for the under-25s – far below minimum wage.

Workfare means those in paid positions may see their jobs replaced by this unpaid labour. Why would a company pay for people to do these jobs when they can get free labour from the Job Centre?

We can put a stop to this forced unpaid labour – Waterstones, Sainsburys and TK Maxx have all recently announced that they would no longer take unpaid placements – the other companies just need a bit more encouragement to stop this exploitation.

We demand an end to this exploitation and call for welfare rights and living wages for all!
If you continue to exploit us we WILL shut you down!

In conjunction with Notts Trades Council.

The government has budged a tiny bit on workfare by claiming to withdraw the sanctions from its Work Experience scheme. This is a direct result of the enormous public pressure that has been put on companies who have been profiting from workfare.

But this is not the end of workfare and therefore we must keep the pressure up. That is why we will be taking to the streets this Saturday. Work Experience is just 1 of 5 workfare schemes. The Work Programme is another one of these schemes in which job seekers will be forced to work unpaid in high street stores, including well known charities, up and down the country. Some of these stores that may be worth a visit include – Wilkinsons, Savers, Asda, Pizza Hut, British Heart Foundation, Barnardos, Holiday Inn, Poundstretcher The Work Programme is a particularly disturbing form of workfare – not only can job seekers be forced to work unpaid for 6 whole months, but most shockingly, disabled people can be forced to work unpaid for an unlimited amount of time.

If you cannot make it to your local high street (or there is not an action near you) then you can follow the link to the companies’ online complaints page to raise issues about the exploitation that they profit from. You can also target the usual suspects (Tescos, Poundland, McDonalds, Holland and Barret, WH Smiths) who are still taking part in the Work Experience scheme and may well be involved in others. And then there are the companies who have only suspended involvement: Scope, Matalan, Argos, Superdrug. The Work Experience scheme is still a cause of concern. As the government press release made clear, there are still sanctions involved in this scheme and therefore there is still the element of compulsion. George Osborne has stated “Young people who don’t engage with this offer [of work experience] will be considered for mandatory work activity” where severe benefit sanctions (starting at 3 months!) can be imposed. With the Work Experience programme still being linked to sanctions directly and indirectly, and still remaining unpaid, we suggest pressure is put on companies to withdraw their support and to offer real paid jobs!

Here are some forms of action that will be happening up and down the country that you may like to try out: local groups are planning to do tours of the companies involved, set up stalls to make people aware of their rights on the various programmes (see Boycott Workfare site for materials), go into stores and ask managers to withdraw support or simply shut the stores down. Teach-ins and mic-checks are also fun activities you might want to include.