At a packed public meeting on Thursday 22nd Sepember 2011 at the Mechanics Institute, North Sherwood Street, Nottingham, people heard about the progress of Andrew Lansley’s NHS Bill (having passed its 3rd reading and now going to the Lords). It’s all bad news of course. The meeting heard from speakers, Prof Wendy Savage [Keep our NHS Public], Barry Brown [Unite] & Gill George [Unite] laying out their concerns and all pointing out that this was all a device to dismantle the NHS and privatise many of its service.

The meeting also heard that privatisation was already well under way, with a consortia including Richard Branson’s Virgin having taken over NHS services in Surrey under the name Assura Medical. One of the speakers gave an example of protest by Unite members where speech threapists had harangued Health Minister Andrew Lansley in Downing Street.

In Nottingham there are two significant meetings to do with the NHS next week:

A map of the City Hospital showing the location of the car park is available here: http://www.nuh.nhs.uk/patients-and-visitors/transport/city_maps.aspx (marked ‘P’ opposite the Purple entrance).

We are going to attend these meetings in order to point out that:

1. The reorganisation of the PCT being carried out by NHS Nottingham City is illegal because the legislation to authorise this action, the Health and Social Care Bill, has not yet been passed by Parliament.

2. The plan by Nottingham University Hospitals to become a foundation trust should be dropped.

We urge as many people as possible to attend these events. What is needed are effective actions to disrupt the “reforms”.

UK Uncut are planning a huge action on Sunday 9th October in London. Their plan is to block Westminster Bridge, symbolically blocking the Health & Social Care Bill from Parliament. More details in the links below.

Notts Uncut have been able to arrange a free coach from Nottingham to take people to this event but we need to ensure that we fill the coach. If people want to reserve a seat, they need to e-mail nottsuncutaction@gmail.com and we will be in touch regarding departure time etc. Please spread the word.

Take action against ATOS Origin and the ‘Poverty Pimps’ in Nottingham on Friday 30th September 2011. Join us for the National Day of Action against ATOS Healthcare and the government’s attack on benefits for people with disability and illness through the ‘Work Capability Test’ and the Welfare Reform Bill. ATOS Healthcare (a division of ATOS Origin) have the Dept of Work & Pensions contract to carry out medical assessments using a proprietary computer program in local assessment centres using medical and admin staff with very questionnable conduct (see previous article about their antics: http://nottssos.org.uk/2011/08/22/atos-healthcare-medical-examiners-admin-under-fire-for-bad-mouthing-customers-and-improper-conduct/ ).

Join us for a demonstration and leafleting in Nottingham on Hockley (Goose Gate) Friday 30th September 2011 at 12.00pm (ATOS is on Stoney Street). Facebook details at http://tinyurl.com/nottsatos

Groups campaigning in Nottingham to protect welfare include:

Atos Origin have £300 million contract with the Con-dem Government to continue carrying out ‘work capability assessments’. It is claimed assessments are to test what people can do rather than what they can’t. The real purpose is to strip benefits from as many people as possible. This testing system has already led to people with terminal illnesses and severe medical conditions being declared fit for work and having benefits cut. GP’s are ignored in favour of decisions made by ATOS Origin’s computer. Plans announced for the scrapping of Disability Living Allowance have also revealed that this intrusive testing is likely to be extended to everyone on some form of disability or health related benefit. To date around 40% of appeals against Atos Origin’s decisions have been successful. Atos have now extended their harassment of sick and disabled by using legal threats to silence websites which have been critical of them, see the Benefit Claimants Fightback website below for more details. http://benefitclaimantsfightback.wordpress.com/

More attacks on benefits coming up: Terminally Ill to have benefits stopped – under Welfare Reform Bill plans, ‘contributory-Employment and Support Allowance’ (c-ESA) will be time-limited to one year from April 2012. Terminally ill people who have accessed c-ESA since April 2011 may lose all out of work help in just six months as a result.

Press Release
Towns and cities around the UK will see protests tomorrow (30th September) against Atos, the IT Company responsible for carrying out the con-dem government’s Work Capability Assessment. As part of a National Day of Action Against Atos, organised by disability, claimant and anti-cuts activists, people will be gathering outside Atos’ offices in Edinburgh, Leeds, Manchester, Nottingham, Brighton, Chatham, Cheshire, Birmingham, Glasgow, Hasting, Norwich, Oxford, Bristol, Chester, Plymouth, Sheffield and York.

In London a demonstration is being held outside the BMJ Careers Fair where Atos will be exhibiting in an attempt to recruit doctors to work on their Disability Assessment teams. Thousands of people have been denied or stripped of vital benefit because of decisions made based on Atos’ assessment procedure which involves a short interview and a computer based test. Many people have had conditions worsened, either by being forced into the workplace, having much needed money withdrawn or the stress of the assessment process, which has been described as relentless. Sadly some have taken their own lives after hearing of Atos and the DWP’s decisions to remove their benefits. Even people with cancer and other terminal illnesses have been deemed ‘fit for work’. The government has pledged that this form of testing will be extended to all disability and health related benefits.

This week over one hundred groups and individuals signed a letter to the BMJ and the RCN urging them to stop allowing Atos to recruit at their events and in their publications: http://benefitclaimantsfightback.wordpress.com/open-letter-on-atos-healthcare-to-the-bmj-and-rcn/

An online protest will see companies and organisations which do business with Atos contacted and informed of this company’s ‘callous and cruel’ treatment of disabled and sick people.

Supporters of Disabled People Against Cuts have said that “As long as ATOS continues to treat disabled claimants little better than animals they will continue to protest against them and seek means to discredit them.”

The Day of Action has been called by a range of different groups and organisations throughout the UK. For the full list of supporting organisations and further details of all protests please visit the website at: http://benefitclaimantsfightback.wordpress.com/
Contact details of some of the paticipating groups are as follows:
· Benefit Claimants Fightback: notowelfarecuts@yahoo.co.uk
· Black Triangle: info@blacktrianglecampaign.org Scotland contact: 07778 316875
· Defend Welfare network
· Disabled People Against Cuts: mail@dpac.uk.net contact:07714 927533
· WinVisible (women with visible and invisible disabilities): win@winvisible.org Tel: 020 7482 2496.

Atos Healthcare is part of Atos, the French multinational IT company which operates in 42 countries and which has the IT contract for the Olympic Games.

The National Day of Action Against Atos is the sixth National Day of Protest targeting benefit cuts, which has seen a diverse network of claimant, disability and anti-cuts groups and individuals taking action in every major city in the UK. As well as protests outside Atos offices, demonstrations have been held outside jobcentres, workfare provider’s offices, the Daily Mail for witch-hunting benefit “scroungers” and Westminster Council over the ban on soup runs.

On Saturday 10th September 2011 at 12.30am Nottingham Un-cut protestors gathered outside the central library in Nottingham to start a day of action against tax avoiding companies. A nice report and great photos can be found here: http://nottingham.indymedia.org.uk/articles/2038. Notts Uncut: http://www.nottsuncut.co.uk or email nottsuncutaction@gmail.com

The following day the Sunday Telegraph reported that one of the main high street tax avoiders Sir Philip Green – who put investment company Taveta, that acquired Arcadia Stores empire Burton, Top Shop etc., in his wifes name in 2002 so managing to avoid paying £285 million in tax in the UK – is now claiming that the occupation of the Fortnum & Mason store earlier this year by protesters against Government cuts encouraged this summer’s rioters and looters. Funny old world. 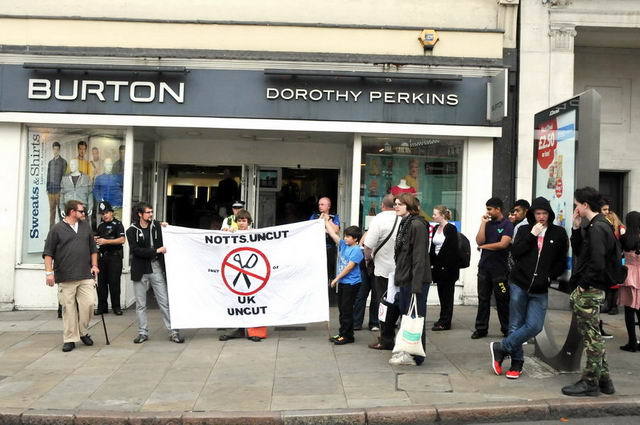 Notts Save Our Services will have its fortnightly meeting tonight – Monday 12th September – at the usual venue (YMCA International Community Centre on Mansfield Road), starting at 7.30pm and finishing around 9pm. We’ll be planning our forthcoming demonstration on October 15th, the same day that the Youth Fight For Jobs ‘Jarrow March 2011’ will complete its leg from Bulwell into Nottingham City Centre. We’ll also be discussing the next steps in the Save Our NHS Campaign (don’t forget the public meeting on the 22nd), proposals to address ‘welfare reform’ and reports from actions (Notts UnCut had their latest city centre event on Saturday). Meetings are open to all, and the agenda is formed on the day, so come and bring your ideas. We usually take the opportunity to go to a pub on Mansfield Road after the meeting.

Did you know? – you can get an email everytime a blog article is published on the Notts SOS website. Just scroll down and fill in the ‘Email Subscription’ form on the right. We also have a facebook page with notification of forthcoming events and a twitter feed.

March for the Alternative – Birmingham. Sunday 18 September
Notts Trades Council will be funding a coach to this TUC sponsored event which will leave depart from the following locations / times:

The coach is free to Trades Council delegates and families but travellers will be asked to make a donation. Please let Paul Martin know as soon as possible if you require seats on the coach and your preferred pick up point. The return coach is expected to leave Birmingham at around 4.00 pm. Paul Martin is on 07986 351 807.

Government U-Turn: Victory for the Action For ESOL campaign!

The Skills Funding Agency has confirmed that full funding is available for ESOL and other adult courses formerly subject to the restrictive eligibility criteria that would have excluded up to 75% of adults on so called ‘inactive’ benefits. This represented a huge attack on adult education, and would have affected students from some of the poorest inner city communities. Action for ESOL was particularly concerned with the impact on non-native speakers of English who need English to support their children, find work, access education and play a full role in their communities. 250,000 adult places that were risk this year can be now be saved! This is an important victory for the Action for ESOL campaign. 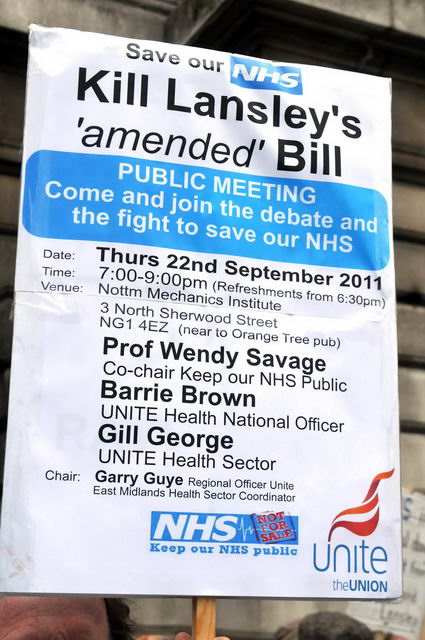 Notts Uncut are getting together again this Saturday (10th) at 12.30. All welcome.

Notts Uncut are meeting this Saturday (10th Sept) to transform a tax avoiding corporation into a space to discuss our experiences of these companies and how the cuts are impacting on us and our friends and families. Meet outside Nottingham Central library (Angel Row, Nottingham, NG1 6HL) at 12.30 to move onto our secret target. If you are late call us on 07856565214 to find out where we are.