Skip to content
Workers, students, unemployed, a wide spectrum of people of Nottingham City and the County including families with their children joined the National Union of Teachers (NUT), Association of Teachers and Lecturers (ATL), University and College Union (UCU) and the Public and Commercial Services Union (PCS) at the Forest Recreation Ground in a large show of solidarity against pension threats, job losses and pay cuts in the public sector.

These pension threats are part of the ongoing attack on the wages of workers whether immediate or deferred and the push to make us all work harder and longer to pay for the profit losses of the banks with their market manipulations. A crisis not of our making. All this while the rich are all but unaffected, the banks have been given billions, and corporate interests are taking the piss with massive tax dodges.

Amongst a sea of trade union banners, trade unionists, services users and those threatened or already suffering from service cuts marched to Trinity Square. Anti-cuts activists involved with Notts SOS were prominent in the events. Trade union activists then marched to the Albert Hall for an indoor rally and campaign meeting. Speeches in Trinity Square continued to outline the threat to education, the NHS and local services from government policies. At County Hall, Notts Unison members and supporters protested against cuts and axing of vital services supporting people in the County.

At the same time as the Albert Hall meeting, after packing up began at Trinity Sq., Notts UnCut visited the usual targets of tax-avoiding companies in the city centre to protest against the hypocrisy of companies like Boots who now have their HQ abroad to avoid tax. All this whilst the Chamber of Commerce of Derby and Notts has the audacity to complain about the loss to UK PLC of one strike day. Especially galling as this was the same day that Lloyds TSB bank said they aim to axe 15,000 more jobs (on top of 27,500 losses already announced) as part of a review to get them back into the black – showing again that it is workers who are paying for the crisis, while it was reported by the Daily Telegraph that “Investors welcomed the results of the review sending Lloyds share price up more than 6pc in early trading to 47.17p”, showing which side private investors are on.

Earlier in the morning, from 8am, Notts UnCut and Notts Save Our Services activists, including some individuals from unions not on strike today but supporting the strike action, went round pickets at Job Centres, Courts and the Tax Office handing out sandwiches, cake and chocolate, giving a boost to the official pickets.

The night before, other activists reported having superglued the locks to the doors of Job Centre Plus on Canal Street, and also Atos Origin on Stoney Street (who carry out health examinations which are being used to carry out government policy to kick a lot of disability claimants off vital benefits). Elsewhere in the UK, activists made the links between unemployed struggles and the PCS dispute.

Some of the high points: It a was a large and passionate march from the Forest and families with children who were missing school due to the teachers’ strike came along to support their school teachers. Royal Mail workers refused to cross picket lines. Workers asked for union application forms on pickets. Lots of honking of horns supporting the pickets and march, including bus drivers.

Some of the low points: At one point picket supporters were chased and shouted at by G4S security staff at the Tax Office for going off the right-of-way through the middle of the office grounds in order to find the strikers. Then at Castle College we heard that Teaching Assistants were disgracefully covering lecturers’ classes. Elsewhere some individuals seemed to have fallen for politicians’ rhetoric about pensions and against strike action.

But this will not be the end of the strikes and other actions against austerity. In fact action against destruction of the NHS will take place next week on Tuesday 5th (NHS founding anniversary) and a major day of action on Saturday 9th of July. Activity on the 5th will be in North Notts as well as Nottingham. Full details elsewhere on the site or coming soon. The next Notts SOS meeting is on Monday 4th July at the usual venue – YMCA International Community Centre on Mansfield Road, starting 7.30pm. Come and get involved with saving your services! 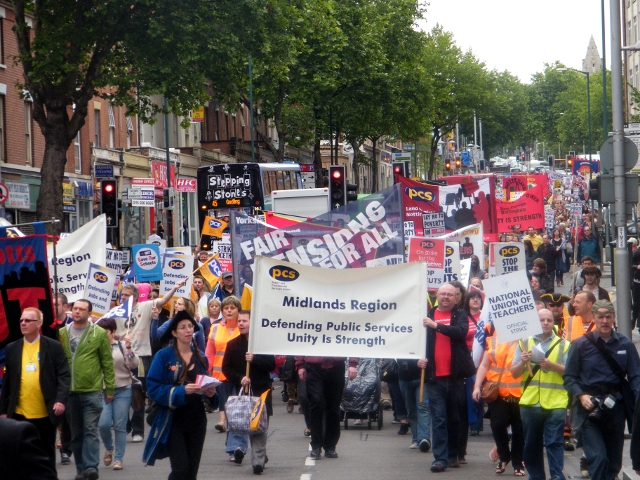