Highlighting the level of contempt for people receiving sickness and disability benefits, that has been cynically mounted by politicians and amplified by the media over the past few years, a medical examiner working for the private company ATOS Healthcare has been caught calling people they are assessing ‘the down and outs’ on Facebook, whilst an administrator called them ‘parasitic wankers’. ATOS Healthcare, a division of ATOS Origin, is operating under a multi-million pound private contract to the Dept. of Work and Pensions to carry out computerised face-to-face medical assessments of all people on disability benefits. This is a programme of harassment of claimants and those on essential disability allowances which can readily be identified as being part of a as an ideological attack on welfare provision by successive governments. This revelation follows news that twelve ATOS medics are under investigation by the General Medical Council for improper conduct.

ATOS Healthcare are not only involved with medical testing. They have also also dabbled with private running of NHS facilities, winning a bid from the Primary Care Trust to run a GP surgery in Tower Hamlets. But they had to leave the 10 year contract as they were not up the to job and due to considerable local protest. “Local doctors passed a motion of no confidence in Tower Hamlets PCT. Angry medics and patients, fearful of the potential impact of the privatisation of this part of the NHS, staged a protest march, and wrote to MPs and the PCT to complain about the decision.”
This is only one part of the stuggle against NHS privatisation which obviously needs to be linked to the attack on benefits as well. A meeting about NHS privatisation will take place in Nottingham on September 22nd. In Nottingham, ATOS Healthcare runs an examination centre on Stoney St. in Hockley/Lace Market.

New!: ATOS take legal action against Carerwatch and get their bulletin taken down. (temporarily we hope). 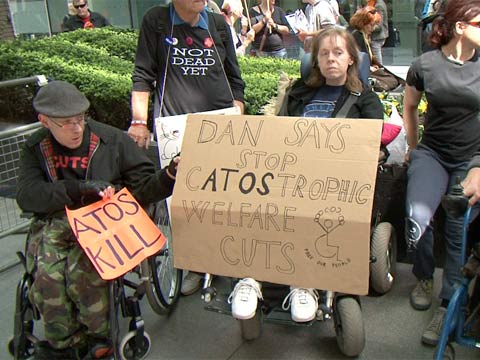 New: ATOS take legal action against Carerwatch and get their bulletin board taken down.