Come to a public meeting in the Meadows to learn more about the Bedroom Tax and in particular how to fight back against it. Starts 7pm at Queen’s Walk Community Centre, NG2 2DF. Download flyer:
Bedroom Tax Flyer – 2 April

People responded positively to the ‘Oppose Cuts, Don’t Pay Council Tax’ campaigning stall held at Bulwell on Saturday, 6th. April. Around two hundred leaflets were handed out and there was little dissent.

Many people in Bulwell on low incomes already are not paying Council Tax because they can’t afford it. Some have been summonsed to court for non-payment. (These people should be supported by pickets at the Magistrates’ Courts.)

There is widespread awareness of the incoming bedroom tax and much opposition to it. Some passers-by recalled the successful Anti-Poll Tax Campaign and as a result are seriously considering withholding Council tax payments. (Leaflets were available which spelt out the consequences of not paying.)

This was an encouraging start to the campaign and there will be a follow-up stall at Hyson Green (near the market) at 11.00 on Saturday, 13th. April. Come along and help get some effective opposition to the cuts off the ground.

A campaiging stall at Bulwell Market Place to urge people not to pay Council Tax as a protest against cuts in local services, bedroom tax, council tax benefit cuts, etc. Already thousands of people on low incomes in Nottingham are not paying Council Tax.

On Sunday 7th April the Notts Campaign Against the Bedroom Tax will be leafleting homes in the Meadows to which the Bedroom Tax may apply. The leaflets, maps and other details are all in hand and we already have 10 volunteers. If YOU would like to join us to do something about the evil Bedroom Tax meet in the parking lot of Queens Walk Community Centre (Queens Walk, The Meadows, Nottingham, NG2 2DF) at 2pm. It will probably last a couple of hours and will go ahead whatever the weather.

Meadows Public Meeting – Wednesday 10th April.
Come to a public meeting in the Meadows to learn more about the Bedroom Tax and in particular how to fight back against it. Starts 7pm at Queen’s Walk Community Centre, NG2 2DF. Download flyer:
Bedroom Tax Flyer – 2 April

Unable to pay your Council Tax Bill?
Worried about getting into council tax debt?
Want to build solidarity with other claimants to fight these cuts?

Nottingham and Nottinghamshire Defend Council Tax Benefit Campaign is running regular sessions in the city centre from Thursday 21 March to monitor the impact of Council Tax Benefit cuts, provide information to people who may not be able to pay their bills and invite them to join the campaign.

The Government has scrapped the national Council Tax Benefit scheme and from 1st April this year local councils have to start their own scheme with less money. Under Nottingham City’s new Council Tax Support Scheme, council tax benefit is being cut by 8.5% for all working age claimants and from April 2014, Nottingham City Council proposes a cut of 20%.

Council tax bills are arriving on peoples’ doorsteps this month causing anger, anxiety and distress as many claimants already on the breadline are being asked to pay amounts they can’t afford. The cuts affect people on low incomes, in part time work, unemployed or unable to work because of sickness (pensioners are not affected at the present time)
This is not an individual problem for claimants, we need to build solidarity to support people who can’t pay and build a campaign to fight these cuts.

For more information (and to check re holidays etc.) contact Nottingham and Nottinghamshire Defend Council Tax Benefits Campaign on 07505 135 807 or defendcounciltaxbenefits [at] yahoo.co.uk, http://defendcounciltaxbenefits.blogspot.co.uk/ , http://www.facebook.com/#!/groups/450355785005204/, https://twitter.com/defendbenefits tweet us defendbenefits 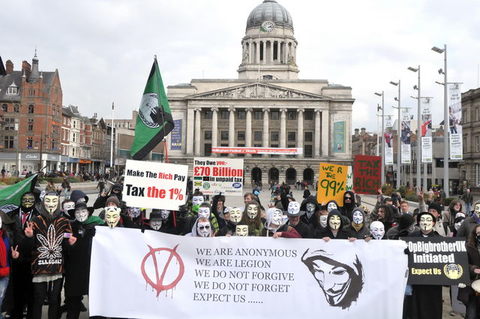 The campaign group have written to the Council asking them to take seriously their own criticism of their latest proposals for a Council Tax Benefit Support Scheme for 2013/14. Instead of going ahead with an 8.5% cut to all Council Tax Benefit recipients of working age, they say the Council should delay passing on the cuts. The Council are permitted to pass a scheme with zero cuts to Council Tax Benefit for 2013/14 and still be entitled to transitional funding. If they did this, they would have a year to build a campaign with local residents and other groups across the country to demand a sustainable and fair alternative and prevent the introduction of a minimum 20% cuts in 2014/15.

JOIN THE LOBBY ON MONDAY 28TH JANUARY AT 1.00PM OUTSIDE THE COUNCIL HOUSE

Nottingham and Nottinghamshire Defend Council Tax Benefit Campaign [1] have written to Nottingham City Council asking them to take seriously their own criticism of their latest proposals for a Council Tax Benefit Support Scheme [2] for 2013/14 , and buy time and fight with local residents for a sustainable and fair alternative.

In their letter, the group say the new proposals are unsustainable, as they do not provide a long term solution to the funding crisis with Government free to keep cutting funds regardless of need. They quote Nottingham City Council Leader Jon Collins predicting “chaos”[3] in trying to collect the money from benefit recipients. They point out that, under transitional funding rules, Nottingham City Council had the option not to pass on the cut to Council Tax Benefit, but have chosen to ask for the maximum amount of 8.5%. They also say that removing empty property council tax discounts and exemptions to part fund the scheme would be unfair and could penalise carers and other groups.

“These new proposals represent a shift away from a Council Tax Benefit scheme based on people’s real needs. A cut of 8.5% in your Council Tax benefit may look better than a cut of 20%, but it will still cause hardship and debt for people who have no money left at the end of the month, and will do nothing to prevent much bigger cuts in future years. We call on Nottingham City Council not to pass on these cuts to the poorest and most vulnerable people in Nottingham” – Chris Jackson, Nottingham and Nottinghamshire Defend Council Tax Benefits.

2. The current national Council Tax Benefit (CTB) scheme is being abolished under the Welfare Reform Act. All councils in England must bring in their own Council Tax Support scheme from April 2013, with less funding. In October, the government announced transitional funding for councils on condition that anyone previously entitled to full CTB will now receive at least 91.5%. On Dec 18, Nottingham City Council agreed to apply for Transitional Funding of £775,000, and changed its CTB Support Scheme accordingly:

· Putting a maximum limit on the amount of council tax support that could be paid to all working age people, so that working age households who got 100% help with their Council Tax bills now could receive a maximum of 91.5% help in 2013/14
· All working age households would pay at least 8.5% of their Council Tax bill in 2013/14
· No sharp reduction in support for those entering work. The following additional elements were recommended and included, following
· Consideration of the findings of our formal consultation exercise:
· Removal of Second Adult Rebate
· Retaining backdating
· Setting a minimum award level of 50p

FIGHT FOR A FULLY FUNDED SCHEME BASED ON NEED

NCC’s consultation exercise on its replacement for Council Tax Benefit is now over. As such, they now deem it safe to respond to the questions I asked at the consultation event I went to in Bulwell, as I can no longer use the info to come up with clever-arsed objections to their ideas.

They have condemned the proposals which include 20% cuts or more for
many council tax claimants, an end to backdating, and a lowering of
savings limits.

They also say the proposals are unworkable, too costly to run and
divisive because they are separating claimants, who are already
identified as in need under the current scheme, into the deserving and
non-deserving.

The campaign group, who have researched the proposed changes, explain
their objections in detail in a letter and say that if local councils
do not fight to retain the existing scheme, it is likely that the
government will cut the budget further. The group have offered to
fight alongside the Council if they are prepared to fight to retain
the existing Council Tax Benefit scheme.