Nottingham Bedroom Tax Eviction Prevention Protocol does not prevent evictions but shifts blame onto the tenant.

A campaign group has criticised a new Nottingham Bedroom Tax Eviction Protocol[i] signed by social housing landlords including Nottingham City Council, saying that it will not prevent evictions, it offers nothing that tenants could not already access, and potentially blames tenants it they are evicted.

The report[ii] by Nottingham Defend Council Tax Benefits Campaign criticises the protocol for implying that arrears are caused by tenants’ inability to “budget”. It also refers to a UN report which says the Bedroom Tax may be a violation of human rights and the recent announcement by the Labour Party that it will abolish the Bedroom Tax, and concludes that the only acceptable solution to the social, health and monetary costs of the Bedroom Tax is for Nottingham City Council to use its position by publicly stating that it will not evict anyone because of Bedroom Tax arrears and encouraging other Nottingham social landlords to do the same.

[ii] The report is attached to email (this follows below)

Nottingham Defend Council Tax Benefits Campaign opposes this protocol because:
• It will not prevent evictions.
• It does not offer anything to tenants which they could not access anyway.
• It sets up tenants to be blamed when evictions occur.
• It abandons tenants who don’t “engage” when they may be the most vulnerable.
• It uses vague terms such as “engaging” with housing providers and “realistic and affordable.” payment plans, without explaining who defines these terms and what they mean (ie. what is expected from tenants).
• It puts too much emphasis on Discretionary Housing Payments (DHPs), which are temporary, limited, and discretionary.
• It presents the issue of financial hardship caused by the Bedroom Tax as an issue of budgeting, rather than the real issue, which is that people can only avoid rent arrears by using money which is meant for food, fuel, bills, clothes. This implies that if eviction occurs it is the tenant’s fault.

• The term “engaging” is not explained. What exactly is expected of tenants, and who decides whether tenants are “engaging” or not? Many tenants affected by the Bedroom Tax are some of the most vulnerable people in society, who may lack the support to be able to deal with the additional stress caused by the Bedroom Tax.
• Tenants are already free to request DHPs themselves or through advice agencies and there is no guarantee that requesting a DHP will mean a tenant will receive one. Some tenants have received a DHP in repect of bedroom tax arrears while others have been refused. Furthermore, DHPs are temporary so tenants have to apply repeatedly with all the uncertainty that entails.

The agreement states that Credit Union accounts which help tenants to prioritise rent and other bills are also being offered to tenants facing court action.

• All tenants are already free to open Credit Union accounts – at a cost of 50p per month – so the agreement is not offering anything new.

The protocol states that affected tenants will be expected to set up and keep to an affordable payment plan.

• A tenant in Bedroom Tax arrears faces a weekly demand for rent which they cannot afford. The protocol does not explain how such a tenant would suddenly be able to afford a payment plan to pay off their bedroom tax debt.
• The protocol does not acknowledge that arrears would continue to accumulate since the bedroom tax is ongoing and that this would lead to eviction.

By emphasising budgeting, priorities and advice the protocol implies that bedroom tax arrears is caused by tenants’ inability to budget and lack of information. This is clearly not the case. Arrears are caused by tenants being asked to pay towards rent (and council tax) from living expenses meant for food, fuel, clothes, transport etc. Budgetting solutions are unsustainable and set up tenants to fail and be blamed, putting huge pressure on households and leading to evictions.

The social health and monetary costs of the Bedroom Tax, which are hitting vulnerable households, communities and the social housing sector, are unacceptable and unsustainable. A recent UN report says that the Bedroom Tax may be a violation of human rights, and the Labour Party have now announced that they will abolish the Bedroom Tax. In view of this, the only effective way of protecting households from eviction is for the council to use its position to implement a no evictions policy and to encourage other social housing providers to do the same.

Publicly state that they will not evict anyone because of Bedroom Tax arrears.
Recall all notices of seeking possession and eviction notices relating to bedroom tax arrears.
Acknowledge that Bedroom Tax arrears are not caused by tenants inability to budget.
Use all of its DHP budget (including reserves it is permitted to use) to reduce Bedroom Tax arrears (at August 2013 only one fifth of the budget had been used).
With other social landlords and campaigners persistently explain and publicise the social and monetary costs and unsustainability of the Bedroom Tax to Central Government.
Demand that Central Government take responsibility for this policy and the potential damage to the social housing sector, by demanding it makes up the shortfall in rental income to social housing providers caused by bedroom tax arrears.
Demand that Central Government abolish the bedroom tax.

Here are some reports of the court appearance of Council Tax protestor Ross Longhurst:

Also see this report on rent arrears brought about by the Bedroom Tax:

There is a rising tide of mass resentment against the Government’s austerity programme.

Background from the ANTI-AUSTERITY ACTION campaign:

Thousands of people in Nottingham are not paying the Council Tax because they can’t afford it. The policies of the Coalition Government are forcing millions of people into poverty. The cuts in vital local services imposed by Labour-controlled Nottingham City Council are making worse the problems faced by people on low incomes.

It was rich bankers who created this economic mess but ordinary people are being forced to pay.

Now is the time for us to hit back at the politicians who serve the rich.

No Bedroom Tax evictions in Nottingham!

Nine UK councils (including Broxtowe Borough) have said they will not evict people who cannot pay their rent because of the Bedroom Tax – We can get Nottingham City Council to do the same.

Under the “Under Occupancy Charge” (Bedroom Tax), the government is taking 14% or 25% off peoples’ Housing Benefit if they live in social housing (council or housing association) and have one or more “spare” bedrooms.

* The Bedroom Tax unfairly hits people with disabilities, carers, parents with part-time custody and young people who are forced to share bedrooms.

* The Bedroom Tax is a cut in Housing Benefit, which is claimed by some of the poorest in the community including part time workers, low waged and people unable to work because of their health or disability.

* It will not bring down the Housing Benefit bill which is big because of high rents – mainly in the private sector but now social landlords can charge 80% of the market rate.

* Even if people are able and willing to downsize, according to the Evening Post there are only 35 one bedroom properties available in Nottingham for the 6,000 people affected by the Bedroom Tax to move into. Social housing is in short supply because of a lack of investment by the government over many years.

Whilst the Bedroom Tax is a national scheme, local councils have to implement it. Nottingham City Council say they are not in favour of the scheme. We believe the only way to stop the scheme is to fight it. If all Councils against the scheme take the following action, it will force the government to re-think the Bedroom Tax:

· Refuse to evict people who can’t pay their rent because of the Bedroom Tax. The process of evicting someone from their home is long, complex, expensive (it costs £6,000 per household) and extremely stressful.

· Rather than using resources in this way, we say Nottingham City Council should use its reserves to build a campaign in Nottingham to pressurise the government to scrap the Bedroom Tax. We believe this campaign would be supported by the majority of people in Nottingham – many of whom are unaware of the changes.

At the Council meeting on Monday July 8, the council will be discussing how they will be implementing the Bedroom Tax. 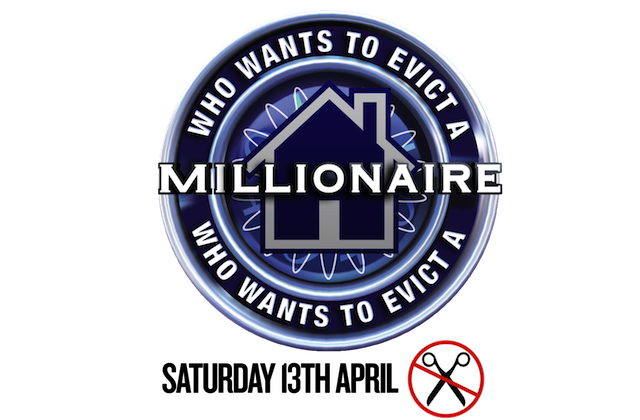 Disabled People Against Cuts are serving an eviction notice on Iain Duncan Smith, Secretary of State for Work and Pensions, in the front garden of his mansion! Protests have also been carrying on at David/Lord/Baron Freud’s (Welfare Minister and architect of the recent reforms who switched from Labour to the Tories around time of election) with UKUncut ‘Millionaire eviction specialists’ white van and many activists on foot paying him a visit. 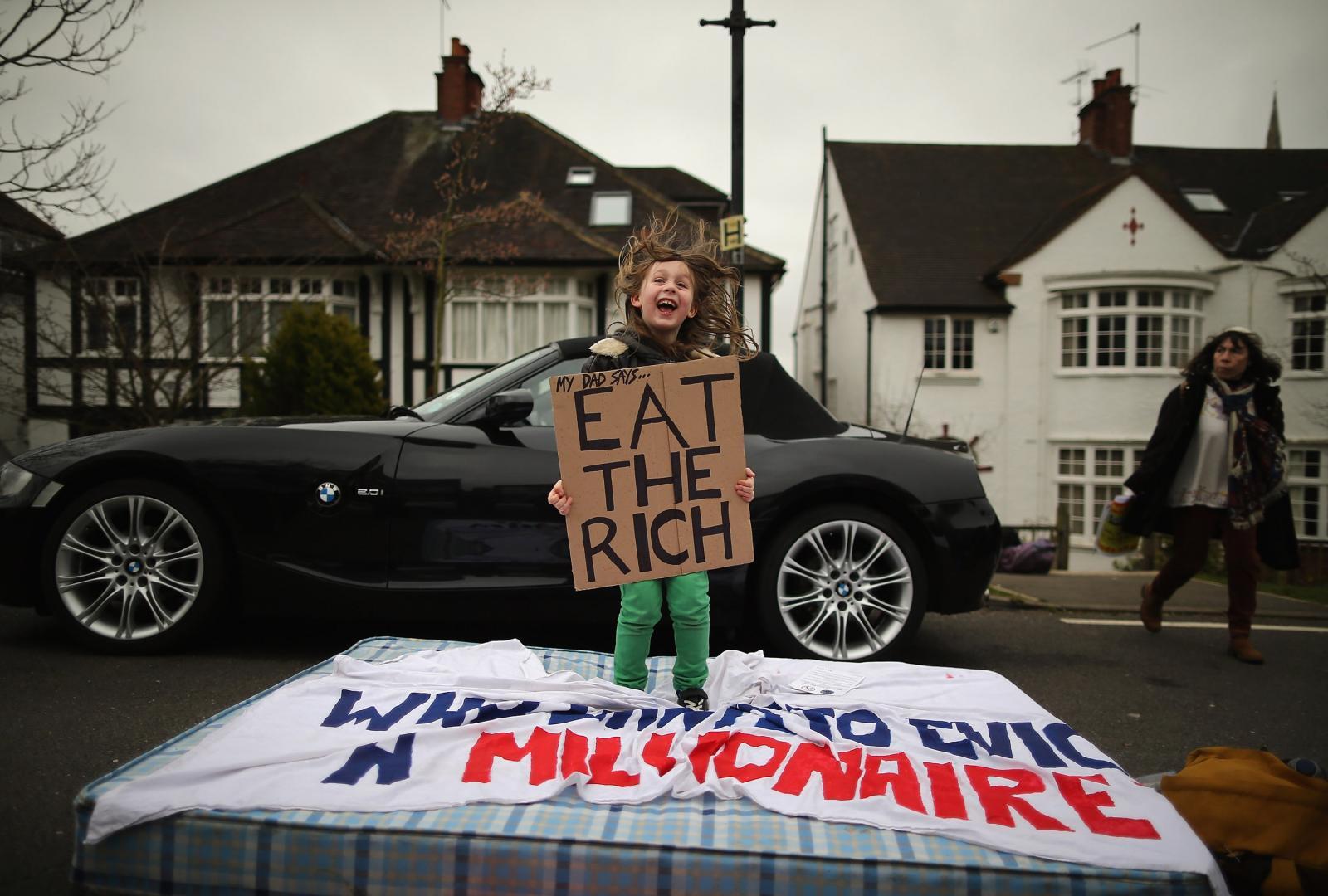 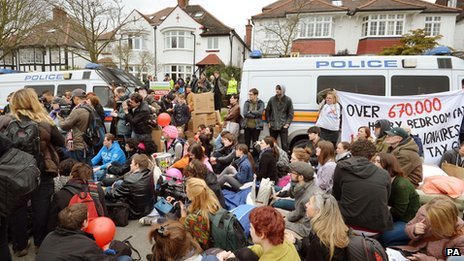 More about the ban: http://www.independent.co.uk/arts-entertainment/music/news/ding-dong-bbc-refuses-to-play-margaret-thatcher-death-song-in-full-on-radio-1-chart-show-8569691.html